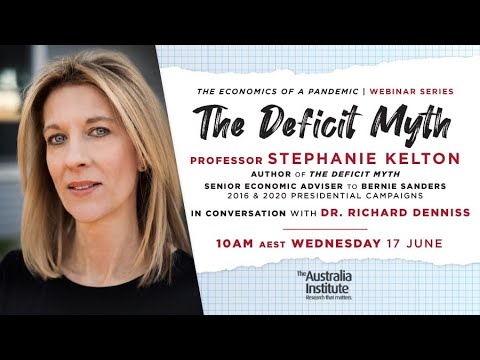 Join author, academic and economist Stephanie Kelton, in conversation with the Australia Institute’s chief economist Richard Denniss, for a discussion of her new book The Deficit Myth, which explains modern monetary theory (MMT) and the critical role of deficit spending.

Stephanie Kelton is a professor of economics and public policy at Stony Brook University and author of The Deficit Myth. She is a leading expert on Modern Monetary Theory and served as chief economist on the U.S. Senate Budget Committee (Democratic staff) in 2015 and as a senior economic adviser to Bernie Sanders’ 2016 and 2020 presidential campaigns.

Part of the Australia Institute’s ‘Economics of a Pandemic’ #AskAnEconomist webinar series.