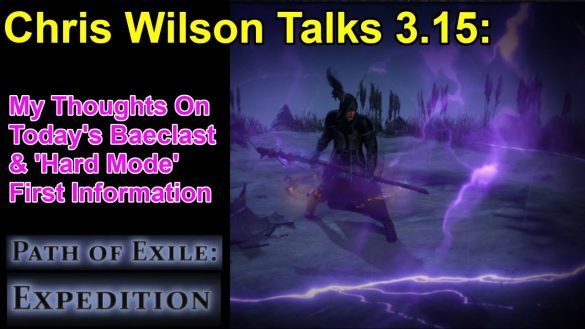 The 3.15 POE changes have been very polarizing. Some (including me) have mostly liked them. Many, probably a majority, haven’t.

Chris Wilson did an extensive interview with five streamers who have a wide range of opinions on 3.15.

Redditor Mijati’s post has an excellent text summary of the podcast: https://www.reddit.com/r/pathofexile/comments/p2hk45/over_the_course_of_the_next_day_or_possibly_week/h8lbq12/?context=3

One thing which really excites me is a tentative announcement for a new opt-in Hard Mode. Like SSF or Hardcore, it will be an opt-in harder version of the game – one that sharply reduces loot acquisition rate.

If this goes ahead I’ll definitely be playing it next league (in softcore trade-enabled).

Other significant points (these numbers refer to Mijati’s Pastebin numbers)

11 – “From watching streamers play act 1 they liked it, their issues were mana”.
11 – 3.15 was ‘all the planned nerfs at once’ except for a change to Fortify (elaborated later but basically about linking it to melee damage done). Done to buy room for power creep in future.
30 – CW not happy with present state of defence, want more options available.
MY OPINION NOT CHRIS’S: IMO there’s a massive overhaul needed here, time to kill against players isn’t usually 0, but it is often sub 300 milliseconds. I’m for shooting for 750-1200ms, which would take a whole suite of simultaneous changes – my suggestion being increasing player HP pools ~40-70%, lowering player life recovery outliers considerably (e.g. 100ms cooldown on %life on block and %life on kill, lower numbers on Agnostic), and dropping block/dodge max realistic achieveable numbers to 60%. Goal that if you take a savage hit you might want to run away for 2-3 sec.
32 – Further flask changes coming. New mod pools. 4 tiers of magic mods – this WILL cause alterations to rise. Enkindling orb buffs.
39 – ‘Was a mistake’ to make it hard to get the specific mod you want (in context of flasks). Instilling Orb comment here, 1 in 16 chance to hit the right one.
40 – Octavian’s opinion – “I think the one thing have to be careful of with tiers. Core defensive layers in a build that a character relies on are not locked behind a tier of content you can’t access. I think that’s what flasks were papering over throughout PoE and one of larger pain points.”.
41 – Ailments – vision is that ignite/poison/bleed should be dealt with through reducing damage, team want to move the other ones from items to skills and pantheon.
48 – HARD MODE! Different to HC or SSF, basically it’s the core game but with extremely limited items, no crafting bench and a number of other restrictions. Number of questions about easy modes as well, Chris states they are mostly happy with the core game’s accessibility – a newer player can beat most content but will feel compelled to improve to get to the top stuff.
67 – Aspirational content (e.g. Uber Atziri at release). “Firmly believe why items need to be attractive to get is content you can’t do.”. Might see uber versions of ‘farmable’ past league content, like uber blighted maps. No promises, but some might be in 3.16
94 – Atlas crunch. 4 regions instead of 8. 100 maps instead of 160. Shuffling in and out. Basically seems to be a hard removal of the very polarizing 16-32 section of the Atlas.
109 – Splintercide
111 – not rendering filtered items
127 – Fortify overhaul to be linked to quantity of damage done
151 – Harvest, “we like there being a degree of deterministic crafting but don’t want them being the best items in the game”
164 – If you get items through crafting then why kill monsters? We’re going to fix the game so you kill monsters for items
197 – indirect HH nerf
209 – POE subreddit they appear to be avoiding for obvious reasons.

I’ve started streaming on Twitch! https://www.twitch.tv/sirgog will take you there.

You can buy some POE microtransactions and/or games from my Nexus store, and I’ll get a cut. Link: https://www.nexus.gg/sirgog