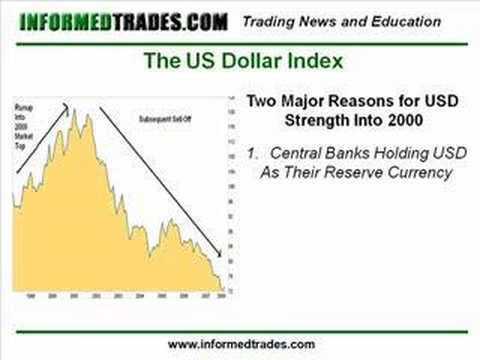 To help understand this better lets look at the example of the US Dollar. As we’ve discussed in previous lessons, the United States has run a very large current account deficit for quite some time, meaning that the country has imported many more goods and services than it has exported. As this chart of the US Dollar Index shows however, for a number of years the US Dollar continued to strengthen, despite this large current account deficit.

As you can see here going up into 2000 although the US ran a persistent current account deficit, the currency overall continued to strengthen before starting to sell off from late 2000 forward. Now I am making some pretty significant generalizations here for simplicities sake, but there are two major reasons that fundamental traders will point to as reasons for this:

1. Although this is starting to change somewhat, there has for many years been a strong demand for US Dollars because the US Dollar is the currency of choice for many major central banks to hold as their reserve currency, with Japan and China being the countries you will hear most about in this regard. This creates a demand for dollars on the capital flows side of the equation that helped to offset the persistent current account deficit going into 2000.

2. As most of you will remember the NASDAQ top which happened in March of 2000 was preceded by a major bull market in the United States, one in which foreign investors were active participants. As we learned about in our lesson on capital flows this also created a large demand for dollars, further helping to offset the large current account deficit.

After the sell off of the NASDAQ however, foreign investors fled the US Stock market along with a lot of other traders and investors. As there was no longer as much foreign capital flowing in to offset the large current account deficit, the US Dollar began to weaken. As the dollar began to weaken this created a chain reaction with the central banks who began to diversify into the EURO and other currencies, further exacerbating the dollar’s sell off.

While it is not important to understand all the intricate details at this point, what you do need to understand is that in order to have a feel for the long term fundamentals of a currency, it is important to have a general understanding of what is happening from both a trade flows and a capital flows standpoint, and how these two things interact with one another. As we will learn in coming lessons all fundamentals with currencies can be related back to these two basic concepts, so for your homework assignment for this lesson I encourage you to consider the following question:

As the value of the US Dollar falls what effect if any should this have on the large current account deficit in the United States and why?

If you would like to post your answer in the comments section of this lesson on InformedTrades.com for discussion this is something that I always encourage.